We set out from Barrington on Friday, December 1st as a cold front made it’s way to the region. We’d had a couple days of beautiful, sunny weather but knew it couldn’t last. New England in fall is rarely this forgiving.

Just before dawn we headed down the river and into Long Island Sound, cruising through the night in the wide open waters. At dawn we could see the New York City skyline peering through the fog to the south as we turned West long enough to fuel up in Norwalk, Connecticut.

By mid-day we were cruising past the city and saw over an hours delay just before the Manhattan bridge while the president’s helicopter was standing by along the river. Eventually it and two Osprey VTOL aircraft departed and we were able to see Lady Liberty at sunset.

Another over-nighter and full day brought us to Norfolk, Virginia – a military town where it seemed half the Navy fleet was docked. The Lincoln, Truman and George Washington were three of the carriers I recall passing on our way up the river. We found space at a transient dock and departed the next morning up the IntraCoastal Waterway (ICW).

Through a lock that lowered us barely a few feet into the channel, we continued to Coinjock Marina where we chatted with the lovely owners of the Nordhavn Emmanou. We’ve been following their progress to Florida on the Marine Traffic app ever since.

Another day cruising the ICW put us on the Neuse River where we found a calm anchorage spot for the evening and the next morning, after a quick flight on the DJI Mavic Drone, progressed through another channel to Beaufort, North Carolina. We spent the day provisioning and running errands and departed early back to the Atlantic for a run down to Charleston, SC.

Mike, the previous captain of Wanderbird has been along for the ride and show us the boat and needed to fly back for a wedding, so we docked at Patriot’s Point and explored Charlotte for a couple days despite what everyone says was unusually cold weather. Being on the end tie has it’s disadvantages when the wind kicks up, but was nice when the holiday boat parade went by and we were able to watch with the Aqua Hot furnace running! 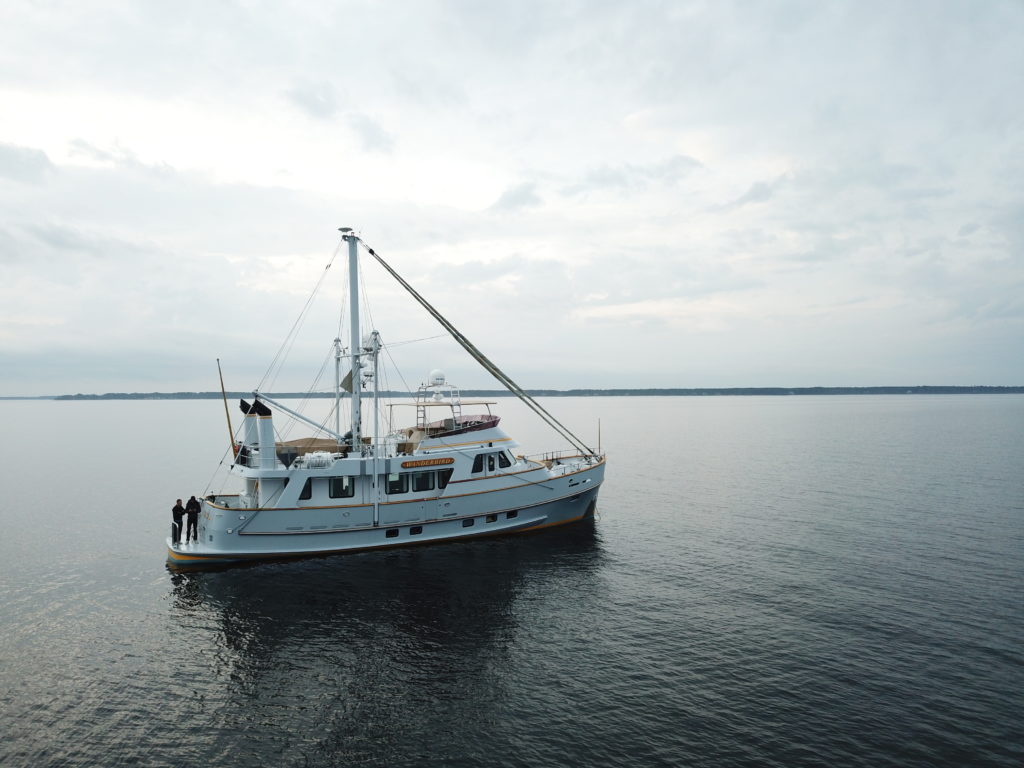 As I write this, Wednesday, Dec 13, having waited an extra day for the winds to calm; we’re now on a 50 – 60 hour run to Fort Lauderdale, where we are lucky to have finally found a transient slip on the New River.