It had been a rough week, the kind that seemed like a nightmare and as I’m scrubbing diesel off my hands and talking the police, no amount of pinching seems to do the trick.

We’d also run aground, this time in a more significant way. After fueling at the city dock (we highly recommend the fine people at Anchor Petroleum), I had cast off the lines, called ‘all clear’ and realized we had a significant list to the port side. Glancing down at the waterline, the growth on the hull was already visible and just then Luke looked down and confirmed my suspicion, the ebbing tide had left us stranded.

Fortunately the city didn’t have anyone else scheduled to fuel that afternoon – if they had it wouldn’t have mattered. No amount of coaxing was going to get Wanderbird into deeper water and back up the river to our slip.We left her there, ran some errands and returned up river to our temporary home by the 4th Ave bridge in the cover of dark. 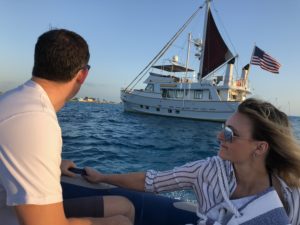 Paul arrived the next day and we started the painful process of provisioning for a month-long-or-more trip. In addition Luke was caching parts for various repairs he hoped to make along the way. Software and computer updates for the navigation, bilge pumps the surveyor checked off as working but were in various states of repair and countless other tasks.

Late at night, on the eve of departure we finally made it to Whole Foods for provisioning. I’ve since decided that in the future, we need to save an entire day for that project. After loading three carts beyond capacity, and learning that they have ‘yacht boxes’ at the grocery store, we got back to the boat and I proceeded to empty every cupboard and food store in order to organize and re-stock in my own way.

A last minute schedule change put our guests, Damon and Gina, joining us in Fort Lauderdale rather than meeting us in Nassau, giving us a leisurely voyage to the Bahamas rather than a frantic run, which was ideal since Luke was now on antibiotics to fight off an earache and nasal infection.

We cast off at slack tide around noon, made our way out to the Atlantic looking at a forecast of calm seas and Westerly winds. This was one of those times when the forecast was way off. With winds from the Northeast clashing with the Gulf Stream we slogged our way towards the Bahamas at a mere 6 knots. This put us onto the bank in the dark and we chose a spot just south of our previous anchorage, off South Bimini, protected from the East and North.

In the morning I woke before the others, as usual, and headed up to wipe down the boat and consider breakfast. As I worked my way back from the bow a small sailing vessel was passing about 50 yards towards shore, standing on the bow were two figures whose wave was unmistakable: arm fully extended, moving from both the shoulder and elbow, a welcome the likes I have seen only once before from a passing vessel.

My reply was half-hearted, mostly from shock. A moment later the radio crackled to life with the words ‘Velocir, Wanderbird, come in’.

It couldn’t be! What are the odds? Over a month had passed since meeting this lovely family of farmers from Ohio in the Northern Exumas over 100 miles away and now here they were, arriving in the same spot, a day apart in a chain of fortuitous chances that brought us together.

We made plans to congregate and do some fishing. Dustin was a farmer, with no prior fishing experience, but had taught himself and his girls to fish, in order to feed his family.

Late morning the next day we picked Dustin up and headed out, first to some grassy seabeds to find conch for bait, then to a rocky, coral area where we found a large school of Bahama Chub cruising around. After a some attempts at spear fishing we positioned ourselves over the school and resorted to the slightly more laborious method of cutting chunks of conch and hand-line fishing, or as the fish seemed to interpret it:free lunch.

After some trial and error we found that smaller pieces of bait, positioned well on the hook would snag us our dinner and ended up with 7 fish, one lobster and a about 12 welp, a type of sea snail. 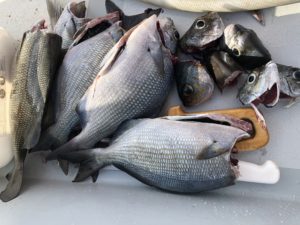 Converting freshly caught fish into read-to-cook fillets requires some skill and Dustin, having taught himself over the last couple months, set at the task while I willingly provided a glass of his favorite rum, Krakin. The scent of fish drew the sharks we had seen earlier to the back of the boat. Being circled in this way certainly added a level of excitement to the dinner preparations and I was glad he waited to clean the fish until after Luke and I had done a quick cleaning of the bulbous bow and waterline as a couple of reef sharks had joined the docile nurse sharks for the chumming. A local in the harbor told us these were Bull Sharks, but I’m pretty convinced they were the former.

Back at the Wanderbird we joined Erin, Sierra, Morgan and Gina to cook up a feast. Dustin went to the messy task of cleaning the bounty with the skill of someone who had lived off the sea for months while Erin showed me a simple and delicious recipe for the fish, using ghee, salt, pepper and Bahamanian Ginger White wine. While I wasn’t up for eating the Welp, I have to say I did try the broth and it was phenomenal. 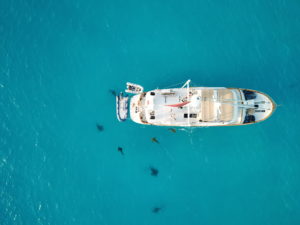 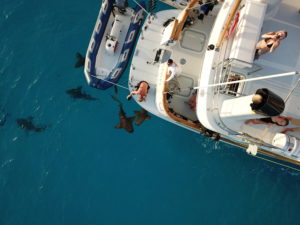 We talked into the night of family, the fortune of experiences, of increasingly connecting with other beings emotionally, physically and mentally, and when it came time to say good night they left us with a gift a local artisan had carved: a wooden dolphin with the date and location where we’d met written on it’s stomach.

Our first gift – from strangers with a willingness to wave and experience something unique, something blessed. Different families leading different lives, coming together and connecting.

Fortuitous friends. What are the odds?