On Friday, Dec 22 we threw off the lines and headed down the New River towards the Atlantic. We would have preferred to leave one hour after high tide, which is optimal slack tide, according to our resident expert Jonathan aboard the nearby Mobjack. We were fortunate to meet this long-time Florida captain who gave us some insight into navigating the river and crossing to the Bahamas.

The joke is that the Wanderbird truly wanders – the boat leads with it’s massive bulbous bow and the stern sometimes drifts along behind. This is an issue when navigating down a narrow river with tidal currents and numerous large and anxious vessels under tow, bearing down from behind as well as two bridges that must be negotiated to accommodate our 47 foot mast.

Luke was a champion of the day however and by sunset we were witness to a spectacular view of a solar, back-lit Miami. 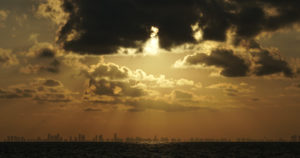 Into the night with placid seas allowed for a comfortable dinner and by midnight we were past Bimini and onto the Banks, the shallow water between various Bahama island chains and our anchoring ground for the night.

Choosing a spot rather at random, we struggled into the wee hours with the ground tackle, having only seen the equipment demonstrated briefly. At one point the 400 pound anchor hung roughly 10 feet off the bow and we weren’t sure just how to engage the winch to bring it back!

Persistance, along with Luke’s mechanical nature prevailed and soon we had the system mastered – raising the starboard anchor back into it’s pocket and choosing the Port due to the direction of the prevailing winds.

It was a restful but brief night with that hefty anchor and 75 feet of monstrous chain to keep us grounded. After a mere 2 hours sleep we were up at 5AM, pulling the anchor and continuing on towards Chubb Cay, where we needed to clear into the Bahamas before 5PM

Chubb appeared in the distance and we slipped between rocks and wrecks along the Northwest Passage and into the harbor. About an hour to clear in, along with $407 (roughly $300 to clear and $107 landing fee) and we were back out, making our way north to a spot Jonathan suggested between Little Harbor Cay and Frozen Cay, in the Berry Islands.

By the time the lumbering Bird got us there, it was dark and we were specifically instructed NOT to hit the exposed rock awash in the entrance, which certainly would have been easier in the daylight. With me on the bow and Luke operating from the fly-bridge we crept slowly through the deep but narrow channel, listening carefully for the sound of the break on the rocks just off our port side.

At dawn we peered into the crystal clear waters at the turquoise glow from white side and sea grass to see our rather circuitous placement of the anchor and chain. A bit of a weave, but sufficient given the calm conditions. Next time we’ll put more effort into arriving in the light and perhaps practice our night deployment of the ground tackle when possible.

With a light wind from the North Luke was anxious to test the mainsail, which can be used to keep the boat oriented into the wind to prevent a side-roll. We were quite pleased with the result and slept soundly.

That morning, being Christmas Eve, we had a hearty breakfast and launched the tender for the first time. It’s a different endeavor than we are used to, the crane serving both the mainsail and davit. It launched well enough but the poor rigid inflatable has seen better days and it was a rough start.

As I’m cleaning up from breakfast Nathan summons me to the stern saying I need to swim a rope to Luke, who I find paddling furiously against the tide fifty feet off the back. I find a suitable rope, secure the end to the main boat and dive in to retrieve our tender.. and my husband.

After a couple hours of failed test runs, the tender seemed to be gaining reliability when the skies darkened and a bit of clouds and light rain and wind rolled in. We decided it’s was against our better judgement to test fate and delayed exploring the Blue Hole on Hoffman’s Cay to our next visit.

On Christmas morning we pulled the anchor, stowed the tender and headed towards the Bahamas for a few days of maintenance, where I write this now, as Luke flushes the sea-chest in the hopes that it will improve the performance of various reliant systems.