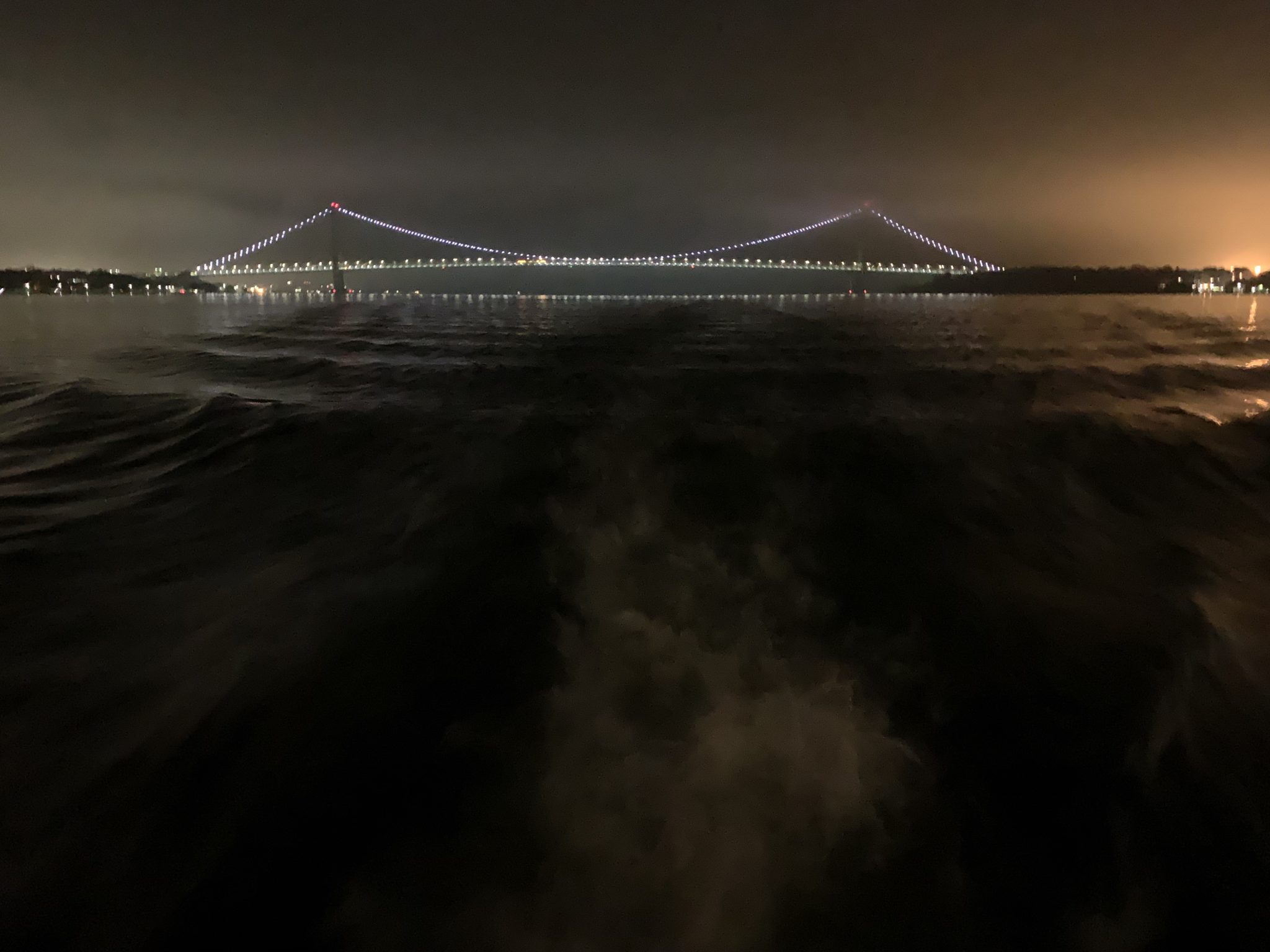 People often ask if we pass through storms. Like inquiring a solider if they’ve seen any action. The first storm we passed through on the Atlantic, which I had watched brewing for some hours, was anticlimactic: hardly any wind, placid seas with perhaps the largest rain drops I’ve yet to witness.

Tonight, along the same northbound route up the Eastern seaboard, we could see lightning storms brewing to the West, over Georgia and South Carolina and to the East over the open Atlantic. As we made our way towards Beaufort, NC, I took watch from Luke at 1 AM, and the Western front was upon us.

The sails were up as the prevailing winds were as predicted, from the south, shifting around from the west, filling our starboard headsail and adding some much needed stability in a mixed port-side, following sea. My mom and aunt were not faring as well as we’d all hoped and the seasickness patches were compounded with Dramamine to keep them in a deep sleep as we rocked and rolled northward in a classic, dark and stormy night.

As we entered the tempest, the winds worked their way around to the bow, climbing from relaxing 7 knots to guest nearing 30, the shifting direction luffing the sails, but a slight course correction allowed me to keep them somewhat to port. At one point there was a loud thud on the upper deck and amidst the rain and lightning I cautiously climbed past the tender to secure the main boom shackle which had come loose – a dangerous thing, having a massive steel boom swinging about the deck while the ship pitches nearly ten degrees each side.

Earlier in the day we did our best to stay in the gulf stream, using the current to increase our normal 8-10 knot speed to nearly 13. The navigation computer doesn’t seem to take into account the fact that this boost doesn’t stay with us and arrival predictions are modified as our speed slows. A teasing mid-day arrival shifts into the night the next day and I feel for our ladies hunkered in the belly of the ship, perhaps second-guessing this particular voyage.

By evening we were approaching the coast of North Carolina and began to feel it’s protection from the northerly wind. While checking the upper deck for loose lines following the heavy winds, I spotted a distictive fluke in the distance, headed our way. I called to Linda and Mom and despite their weakened state, they rushed with me to the bow to watch two, small, spotted dolphins enjoying the energy put out by our bulbous bow. This was the first time I’ve seen this particular behavior. The larger animal rode steady while the smaller swam circles around its cohort. The evening light, clear Atlantic waters and these beautiful creatures made for a magical moment. [see the end of the included video for a clip of this]

Everyone was happy to have a good night’s rest and we left about 9AM, considerably later than our previous trip, after sleeping in a bit. Following the same route, we ended up anchoring in a shallow tributary of the Pungo river. I wasn’t sure we’d be into Coinjock in time to fuel that afternoon but arriving about 3:30, there was plenty of time for 2,600 gallons of diesel and some world famous rib-eye, plus a case of mango salsa. We followed two Flemings out the following morning and made our way into Norfolk in the early afternoon, docking at Waterside marina for an early dinner.

The next 36 hours we ran up the coast. Leaving early put us into the Hudson well before our intended dawn cruise past the statue of liberty. Thick fog blanketed the coast, but fortunately the harbor was fairly clear and we all agreed the run in at night, with the Statue of Liberty and city lit up, was magical, more so than it would have been the following, grey and rainy day.